Take the time to study this object. Is it Earth viewed from space? Can you translate the objects you can see. The sphere has a blue aura, perhaps a representation of the energy around matter (electrons, protons, neutrons) It could be view of a large city on Earth? Tall buildings filling space.

This second piece is a photograph. We see the blue pedals swirling down and down to the center.

From outside in to inside out: Francesco Perratone at Matericlook.com

Space is perhaps the least understood – a conceptualized abstract entity that no doubt exists. Without space nothing exists. No universe, no earth, no planets, no galaxies, no humans, no minds…no infinity. We live in a world where space constantly surrounds us. It’s part of our oxygen, our breath, our life…and our mind.

Art in man’s mind has evolved since the cavemen communicated their history and legacy to us in the present day. Artists evolve and continue to evolve. Many artists drew, sketched and painted on canvas for thousands and thousands of years. Even then artists with a magnifying eye created the space to present a three dimensional abstract or a contemporary piece.

With computerized 3 dimensional media, its popularity has become a big part of today’s genre; presented in cinema, art and medical science. The benefits we reap are still limitless. Artists like Francesco Perratone at Matericlook.com are combining the artists and/or photographer’s eye to include a moving 3 dimensional object. His art presentations and exhibitions stimulate a deeper conscience. ~ Natalie

It is common and not unusual that there are all kinds of hidden shapes, messages and translations in every piece of art. This can also be heightened with a computerized 3 dimensional movement; add music and you are purposely affecting the minds of the artist’s observers.

This is a very distinctive presentation. I related to the experience in many different ways. The transformation is limitless. It’s a yellow diamond moving, breathing, demonstrating. 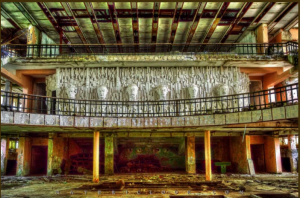 Hello everyone, back from my trip to Armenia, here’s a first related work.

A large abandoned soviet-era building in Jermuk, with a nice sculpture on the facade. It caught my attention, so I took a few steps inside.

At first it didn’t seem particularly interesting. Almost empty, with a relatively modern structure… but after reaching the middle of the ground floor the view is just great!

On both sides there are these very interesting statues, with series of 6 very large heads. A few of them have some lipstick or mustaches added by some “joking thug”.

The impression is definitely surreal. The grandeur of the building and the imposing visages offer a stark contrast from the crumbling stairs and flaking paint. The temperature adds to the feeling: it dropped at least 10 degrees upon entering the building. The cold suggests being inside a giant refrigerator fighting to freeze time, surrounded by a very warm  sun, overheating everything else.

From the few information I was able to gather, it seems the building was indeed built during the soviet era by USSR government. The faces inside represent Armenian heroes and fighters for freedom.

If anyone can provide more info regarding the building and/or the faces, I’ll be happy to include them. The construction is currently undergoing some kind of renovation, as there are some construction materials outside, so it will probably not last long in the current state.

Also here I want to stay on the edge between a picture and a drawing/painting. I made the flaking paint very visible, but the colors brilliant and saturated, to remind the life that was once here.

I focused on the faces and the geometric structure behind, making them stand out a bit. Also wanted to keep the darkest areas not completely black, but suggesting that something’s there.

I then experimented something: In these dark areas I created a look somewhat similar to stains and saturated watercolors, to further the distance from a photographic look. I also used some black fading strokes to highlight details, on both the faces and the structure. You can better appreciate those touches in the details shown below (half of the final work resolution): 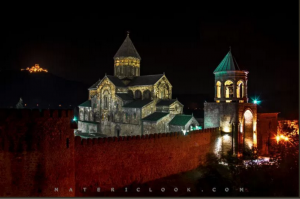 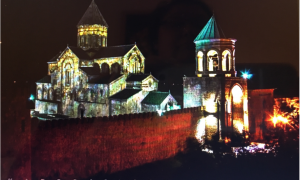 Main subject is Svetitskhoveli cathedral, on the hill in the background it’s possible to see Jvari Monastery.

The cathedral is strongly illuminated during the night, that makes the shot a bit “strange”, I had to actually turn the main building darker (pretty odd, in a nightshot), while keeping details on the facade to make it interesting.

The town is small and very nice with a lot of historical sites, the surroundings are interesting and beautiful, hidden monasteries in the mountains and woods.

Francesco Perratone: My background is in electrical and computer engineering. “I create art (and “stuff” I like) for more than 20 years. At the beginning of my computer graphics experience…. Materic comes from the adjective in “materic painting”, it’s about a feeling, a texture, something you can feel by looking and sometimes touching different kinds of art… it started with an experiment in trying to reach something similar with digital art… something that looks hard and totally opposite to the digital medium. Your work is very nice, thanks Natalie!”